It’s a total treat for art lovers spread all over the world, the moment you see the Adonna Khare mural, I am sure that you couldn’t restrain yourself from loving this one hell of a art piece created by nothing else but a pencil. 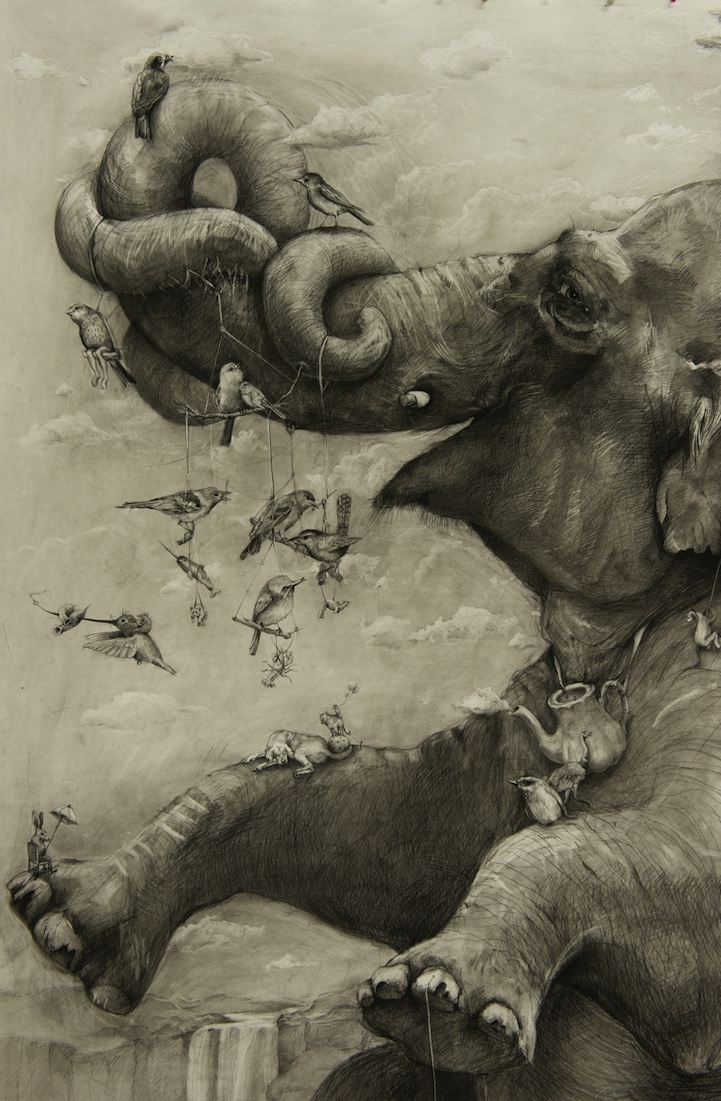 For those of us who think that they can elude art by just thinking of more practical aspects and blaming the everyday chores for draining them out must reconsider their decision. Here is an elementary school art teacher that was not bogged down by her limited means and flickering concentration due to teaching kids in elementary school, the basics of art. 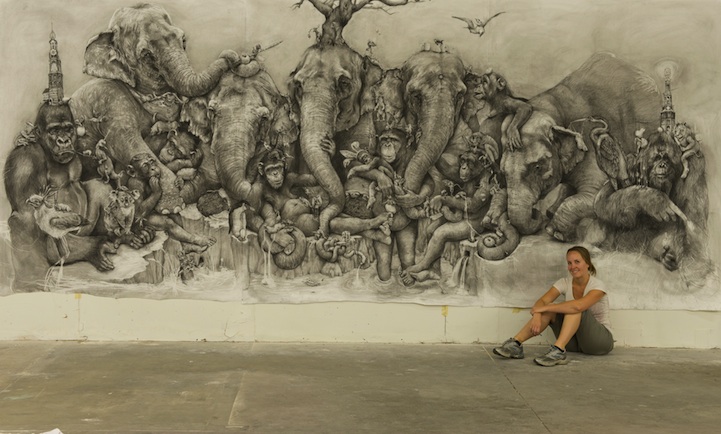 It also reminds me of the numerous other times when I have heard my teachers telling me in Literature classes that it’s the emotion and not the capacity that matters. Unless you are really focused on a theme or aim, there is every possibility that you may be sized down to the helpless ruins where all you could do is sulk and blame for not being able to win over obstacles that were thrown your way. 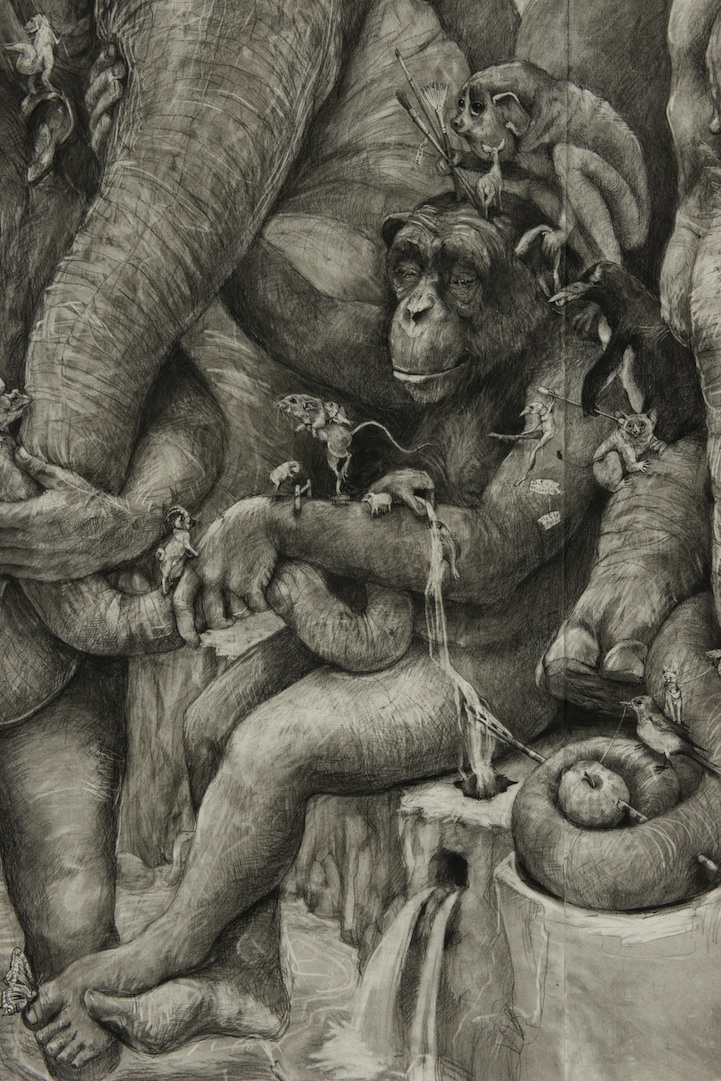 Please excuse me if I sounded preach-ish earlier but sometimes as a believer and positivist, all the anger keeps building in when we are trying and observe unbiased-ly all the hullabaloo going on around us every moment of the day. 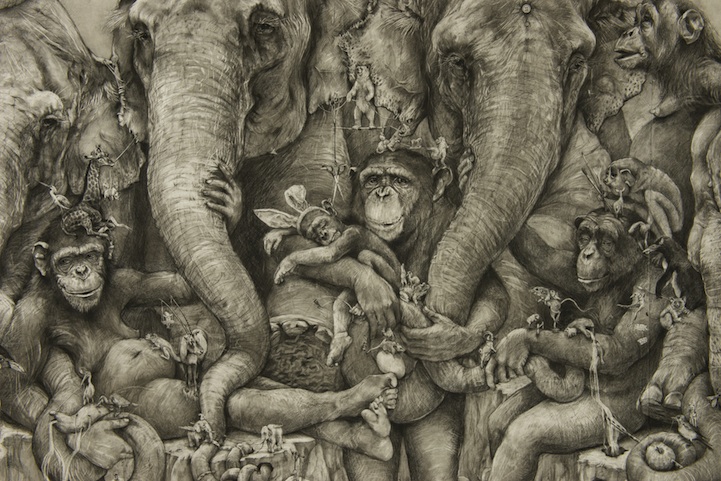 Coming back to the artist in whose honor I am writing this letter, Adonna has created a huge mural of several animals as part of it with each animal blended beautifully in the whole art piece. As many as 47000 voters have cast their votes in the competition leading to the selection of Adonna Khare’s work. It was 12th Oct, 2012 when Adonna was declared as a winner of the ArtPrize 2012 with prize money of $200,000.

It is interesting to know that Adonna walked in the Grand Rapids Museum with her drawing “Elephants” spread out on 8 feet tall and 35 feet wide canvas and put it on the museum walls. While the exhibition was going on, she wasn’t content and so kept on adding to the existing piece. Finally during the three weeks for which the exhibition went, Adonna extended the mural to 13 feet tall and 40 feet wide. You can see more photos of Adonna’s work at her facebook page or website. Adonna hanged her work in the Triptych position so as to make the visitors in the museum notice the progress that she has made with her creation. 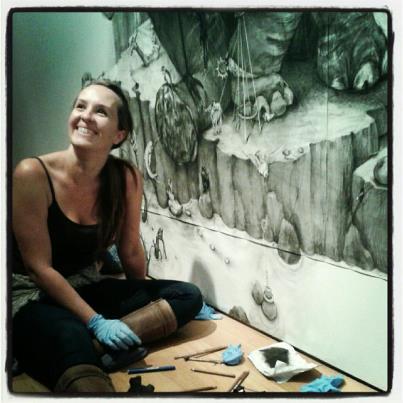 The Los Angeles Times has said on Adonna Khare’s “Elephants” that the artist has created the artwork drawing heavily from her personal experiences. Adonna said about her work “It’s kind of a biography of my life transplanted into animals,” and “Sad things like loss and sickness, and happy things like the birth of my daughter.”

To express her creation of an ape with medical equipments, she wanted to portray her reaction of the moment when she came to know of her nephew’s medical condition diagnosed with Diabetes. To sum up she wanted to capture what it means for a child to turn sick and how being in pain can actually escalate an individual’s chances of survival.

All in all, 10 artists have won the ArtPrize summing up to a total award of $560000 given away to these artists. It may be disheartening for some art lovers following the competition, to know that Kim Ott-Grey, dentist who got interested in painting after a brain tumor surgery has not won the ArtPrize 2012.

The $200,000 prize that Adonna Khare bagged is actually the highest prize money awarded to any artist in the competition. In an interview given by Adonna Khare to the Times, she told that the money is going to help her lend the financial backing to start practicing the art once again and will provide the liquidity to buy mattresses (mentioned as giving cushion to the artist truly).