Team handshakes between QPR (Queen Park Rangers) and Chelsea will carry on as usual before the Premier League scheduled for Saturday also. This is going to be the first meeting for John Terry and Anton Ferdinand after their confrontation in the racism trial.

English and Chelsea defender, John Terry was acquitted from charges of abusing Anton racially at a Premier league match in Loftus last year.  Much curiosity surrounds the Premier League, 2012 over whether Ferdinand and his team will ignore Terry’s attempt at the pre-match handshake ritual honor.

The Premier League has however said after talking to both QPR and Chelsea teams that “All parties understand and acknowledge that the pre-match handshake will go ahead as part of the normal pre-match activity.” 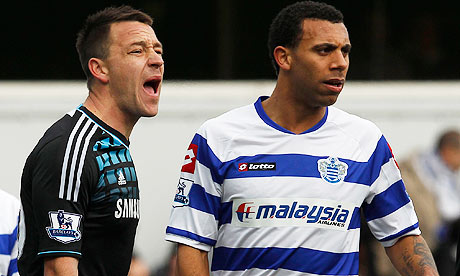 Roberto Di Matteo, Manager of Chelsea has let the world know of his favour for the ritual saying “set a positive standard to the millions of people watching across the world.”

Mark Hughes, QPR Manager has however not said anything clearly. Hughes said though his team will go the way as instructed by the Premier League but also said that he is not going to force anybody in his team including Ferdinand to handshake with Terry.

Hughes also contemplated his thoughts by saying “Everybody has a mind of their own and will make a personal decision,”

“It’s unfortunate that they’re in a situation where it’s in the public domain. Anton is fine, there’s no problem with him.”

The handshake ritual has also been done away with twice before after legal to this effect was received but another development of Terry being acquitted from racial charges has also took place since then.

Terry is also waiting for the Football Association’s judgment in the complaint filed on same grounds.

Hughes also shared his stand on the controversy by saying “I’m conscious of the fact that every time we play Chelsea, the issue of the handshake clouds everybody’s mind and the focus is taken away from a great Premier League game,”

The issue of snubbing team handshakes may remain on fans and media’s radar considering the occurrence of a match between Liverpool and Manchester United to be held next week at Anfield when Luis Suarez and Patrice Evra are also contesting racism charges in the court.

The racism controversy between Suarez and Evra was initiated at the Old Trafford match in February; right after Suarez resumed playing after facing a eight match ban for being guilty in another racist attack on Manchester United defender at a match in October.

The Uruguay striker apologized for his activities and once again started the debate on racism in Football.